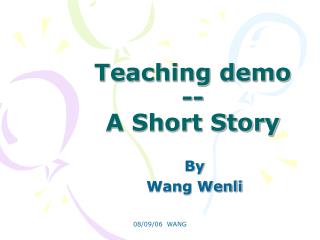 Teaching demo -- A Short Story. By Wang Wenli. play. Importance of the work. Best-remembered and most-studied ， One of the world’s best short stories. (1924) winning the O’Henry Memorial Prize, the top short story prize in America

A short story - . leveraging technology for

Writing a Short Story - . essential question: how can a strategic writer engage the reader through plot and character