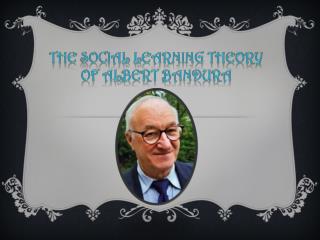 The social learning theory of ALBERT BANDURA. Biography. Albert Bandura was born on December 4, 1925, in the small town of Mundare in northern Alberta, Canada . He received his bachelors degree in Psychology from the University of British Columbia in 1949 . Albert Bandura - . ba from ubc; ma and phd from u of iowajoined faculty at stanford in 1953, been there ever sinceat iowa

Albert Bandura - . by: alberto sikaffy. biography. albert bandura was born in december 4 1925. he was born in mundare ,

Albert Bandura - . &quot;a theory that denies that thoughts can regulate actions does not lend itself readily to the

Albert Bandura - How does gender, age, and distraction influence a child's ability to self regulate and delay

4.2 Social Learning Theory - . albert bandura’s theory. how does society pass down its norms (sets of rules)? we learn