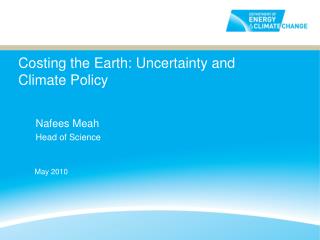 Costing the Earth: Uncertainty and Climate Policy. Nafees Meah Head of Science. May 2010. Climate Change As ‘Hard’ Problem In Public Policy. As a public policy issue, climate change is a classic example of a ‘wicked’ problem OUR FRAGILE PLANET EARTH - . planet earth may be at greater risk than ever before with the emergence of global warming

Expected Utility Theory - . how to deal with uncertainty. introduction. we have talked about individual decision making

CO 2 and Long-Term Climate - . what has moderated earth surface temperature over the last 4.55 by so that all surface