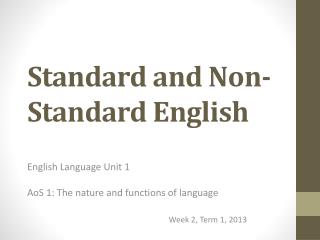 Standard and Non-Standard English. English Language Unit 1 AoS 1: The nature and functions of language Week 2, Term 1, 2013. The structure of English. The English that you speak has a highly organised structure Standard English - . ‘standard english’ is basically the english we are taught at school; the form of english

Standard English and AAVE - . this lesson borrows heavily from peter trudgill’s paper “standard english: what it

Non-Standard Measurement - . how many crayons do you think will fit inside this square?. let’s try one crayon. let’s

Non-Standard Inheritance - . because who wants to be standard all the time?. non-standard inheritance. for many genes,

STANDARD AMERICAN ENGLISH - . there is no single, universally accepted standard for how to speak or write american

Using Standard English - . how to write in a formal style. here is an informal phrase. laura scored a wicked goal against

Standard Grade English - . close reading. types of question?. understanding analysis evaluation what do they test you