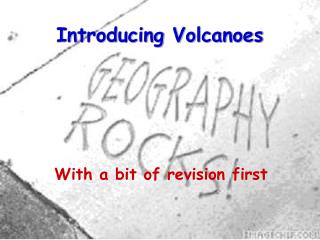 Introducing Volcanoes. With a bit of revision first. Structure of the Earth. The Earth is made up of 3 main layers: Core Mantle Crust. Mantle. Outer core. Inner core. Crust. Plate Tectonics. The Earth’s crust is divided into 12 major plates which are moved in various directions. Introducing Volcanoes - . with a bit of revision first. structure of the earth. the earth is made up of 3 main layers:

Volcanoes - . volcanism:. any activity that includes the movement of magma towards or onto earth’s surface. magma:.

Volcanoes - . a volcano is a mountain that forms when magma escapes the through the crust and cools. what is a volcano?.

Volcanoes - . types, lava, and rocks. cinder cone. simplest type built from volcanic debris from a single vent most have

Volcanoes - . chapter 7. volcano – weak spot in the crust where a mountain forms when layers of lava and volcanic ash

Volcanoes - What would you advise the people near mauna loa to do?. instructions be a volcanologist!look at the websites,

Volcanoes - . by esteban. a volcano is a mountain that has a hole on top. it is called a vent. a volcano can erupt and s

Volcanoes - . a hot topic. what is a volcano?. a mountain formed by lava and/or pyroclastic material. nature of

Volcanoes - . eruptions and forms of volcanoes. types of eruptions. violent and explosive quiet and flowing depends on

Volcanoes - . by amber hiltunen. what are volcanoes. volcanoes are breaks in the earth’s crust where magma comes

Volcanoes - . by josh. where do volcanoes typically erupt?. volcanoes usually erupt over hotspots and near the ring of

Volcanoes - . forces that build and destroy the earth by: jacob. underworld