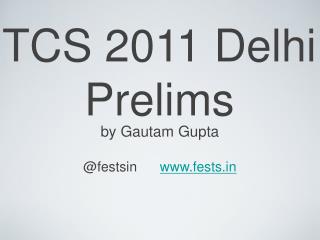 TCS 2011 Delhi Prelims. by Gautam Gupta @festsin www.fests.in. 1. What was the name of a toy, created by Hasbro in 1967, which allows the user to create glowing designs? Options: a) G.I. Joe b) Lite-Brite c) Mandrake. www.fests.in. 2. SPOONING by Subodh Gupta - . his life. subodh gupta was born in 1964 in bihar in india, and now he lives in new delhi,

By Padmesh Gupta, Nagpur Gupta Groups - It's Just a Beginning - Over the course of years, padmesh gupta, nagpur has taken

Dr. Gautam Swaroop Cardiologist - Dr. gautam swaroop is one of the best cardiologist in lucknow. currently working in

- Anuj Gupta - Elements of sign language learnt in an informal setting: the evolution of an indian sign language

Gupta Stone - Gupta stone is a dominant company, it was placed 1981. the company offers an expansive arrangement of