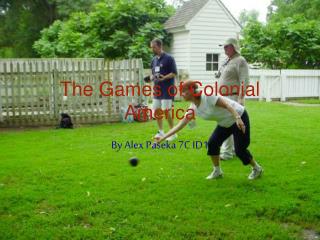 The Games of Colonial America The Games of Colonial America. By Alex Paseka 7C ID1. Summary. Back then children didn’t have the kind of technology to play virtual games so they played real out door games Some kids made their own games Some girls made their own dolls Some boys made wooden horses to ride them. Games.

The Games of Colonial America

Random Terms – Tell me something about… (Colonial Era until Carter) - . by m.a. rivera. colonial era. christopher

Colonial Marble and Granite - , inc. is a one-stop shop for home improvement floorings and décors as well. colonial