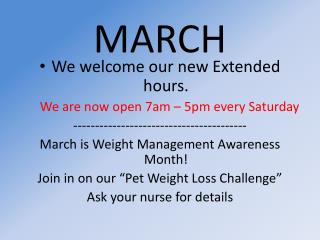 March - For your information from our class. in reading our class novel is tale of desperaux and 4 th graders are

MARCH - . we welcome our new extended hours. we are now open 7am – 5pm every saturday

March - Mărţişor is the traditional celebration of the beginning of the spring in romania, on 1 march. march.

To March or Not to March? - . march on washington handbill division of politics and reform national museum of american

WEEK 25 March 6 - March 9 - . bellringer. what is the last thing you can remember happening in catcher in the rye?.