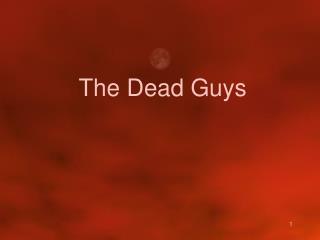 The Dead Guys. Timeline. Ancient Astronomy. Anaxagorus (500-428 B.C.). Greek Philosopher Claim to fame…Indefinite elements in all substances. Banished for saying “the sun is a red hot stone and the moon was like the Earth.”. Pythagoreans (500 – 350 B.C.). Various students over many years. DEAD GUYS YOU NEED TO KNOW - . samuel adams. samuel adams formed the sons of liberty and started the committee of

The Good Guys - Character archetypes. the good guys. the hero —the hero archetype is so well-defined that the life