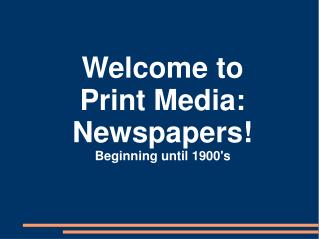 Chapter 2: In the Beginning - . understanding the scriptures. 1. in the beginning (pp. 40–43). anticipatory set discuss

In the Midst Of Revealing the Adversary From the Beginning - . yesha’yahu (isaiah) 46:10 “declaring out of the

Summary of Media Coverage - A journalist is a grumbler, a censurer, a giver of advice, a regent of sovereigns, a tutor of

HISTORY OF ADVERTISING - . the evolution of advertising. age of science. rise of agencies. age of print. industrial

Agenda - Nn. agenda. why do the research? guy how was it done? guy overview of results james the internet

Locked Print Setup &amp; Use for Ricoh MFP - . based on a ricoh document: cheet sheet for locked print.doc screen

GASES - . save paper and ink!!! when you print out the notes on powerpoint, print &quot;handouts&quot; instead of