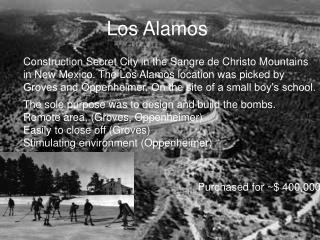 Los Alamos. Construction Secret City in the Sangre de Christo Mountains in New Mexico. The Los Alamos location was picked by Groves and Oppenheimer. On the site of a small boy’s school. The sole purpose was to design and build the bombs. Remote area, (Groves, Oppenheimer) Los Alamos National Lab - Getting protons to study themselves: investigating the proton structure at the relativistic

Los Alamos High School Science Department - . presented to the laps school board september 29, 2011. who are we? what are

Steve Coburn of Los Alamos: Ski Instructor - Steve coburn of los alamos, new mexico is a biker for life, and is a big fan