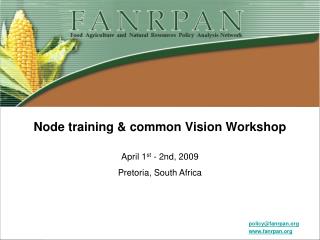 Many Stories - A Common Vision

THE COMMON ErROrS WORKSHOP - . conjunctions. no ‘but’ with although. choose one. and, but, because, so. don’t start

Land Redistribution : Towards a common vision - . why do we care about land redistribution today? part i: messages from

Workshop 5: Common Criteria - . have a greater understanding of the leadership criteria and how they are connected to the