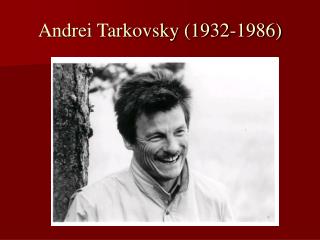 Andrei Tarkovsky (1932-1986). Andrei Tarkovsky: formation. Son of a poet, Arsenii Tarkovsky. Andrei’s mother was educated as a writer at the Literary Institute, but destroyed all her works “for lack of talent.”

Andrei Yeliseyeu - Schengen visas and migration to the eu: belarus as a 'backward leader’. andrei yeliseyeu.

Andrei Chikatilo - . “the butcher of rostov”. by: sarah shepard. serial killer:. a serial killer is a murderer who