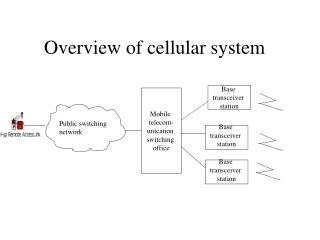 Overview cellular respiration - . catabolic pathways. recall this is breaking down of complex molecules 2 types of

Cellular Respiration Overview - . living things get most of the energy they need from glucose. autrotrophs make glucose

Cellular System Capacity - . maximum number of users a cellular system can support in any cell. can be defined for any

Overview: The Cellular Internet - . cell-to-cell communication is essential for multicellular organisms biologists have

Cellular, Paging, PCS Overview - . there are many common-air-interface (cai) standards in use throughout the world.

Overview of GSM Cellular Network and Operations - . network and switching subsystem. nss is the main component of the

9.1~Cellular Respiration: An Overview - . -organisms get the energy they need from food. ~there is a lot of energy in

9.1 Cellular Respiration: An overview - . i. chemical energy and food. food provides living things with the chemical