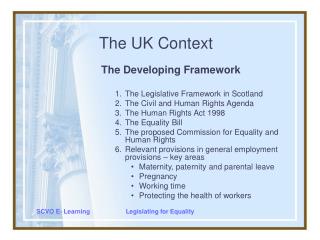 The UK Economy in a global context - Poverty and inequality. globalisation. fdi. constraints to development.

Regulating the Infrastructure in Digital Television within the UK Context - . did the 2003 communications act remedy the

The Context - . some facts and figures the interventions - the world alliance for patient safety the patients for patient

The context - . it began in the 1960’s. there was an upsurge of ‘alternative theatre’ and the formation of several

The Context - ‘ the accidental tourist’: a personal narrative of the evolution of elder abuse in the criminal justice