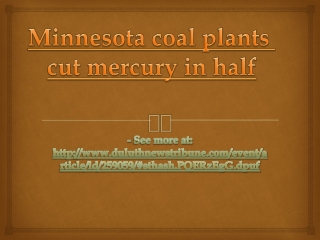 Minnesota regulatory officials said Monday that the state’s coal-fired power plants have cut their mercury emissions by more than half over the past 15 years as the state tries to limit its residents’ exposure to the toxic metal. The Minnesota Pollution Control Agency held a media event at a Twin Cities power plant to herald the effort of cutting mercury from 1,850 pounds per year in the 1990s to about 870 pounds today. PCA Commissioner John Link Stine said the goal is to cut power-plant emissions to less than 200 pounds by 2016, and he praised Duluth-based Minnesota Power and Twin Cities-based Xcel Energy for their effort to cut back on mercury. Mercury MACT Development for Coal-fired Power Plants - . a presentation by the west associates at the epa’s haps mact

Mercury MACT Development for Coal-fired Power Plants - . a presentation by the west associates at the epa’s haps

Mercury Speciation in Coal Fired… - . why did the researchers pick the 3 sites to study? explain in the results

Coal Fired Power Plants - . how they work, why they are harmful, and alternative sources of energy. . coal generates 54%

The Risks to Coal Plants in Coming Years - . david schlissel may 28, 2019. these are troubled times for the coal

Overview of Coal-Fueled Power Plants - . agenda. what is coal? electricity from coal why coal? future of coal. coal plant