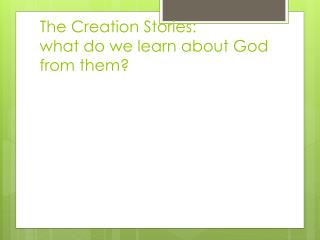 The Creation Stories: what do we learn about God from them? . The Goodness of Creation: . The Primeval History. God is revealed as the one, true God who sustains the whole universe. He created the world out of Love, for God is Love All creation is good: for God is true Goodness Ancient Egyptian Creation Stories - . limitations. i. egypt in academia ancient egypt did not exist 200 years ago

Unit 4 - . territorial days. courts and prisons. prior to 1896 there were no courts in indian territory with authority

Creation and The Creation and Fall of Man - . foundations for life. the creation of the earth. scripture does not define

What Does The Bible Say About Creation? - . dr. heinz lycklama heinz@osta.com www.osta.com/creation. the bible and

SCARY STORIES - . stories to chill your heart and thrill your senses!. scary stories to tell in the dark. are you brave

Joy in Creation - . streams, january 2013. why creation?. bible starts there god starts there people start there. the

Falling Down - . 18 and 19 september 2013. the mulvihill inquiry. okay, so we’re reading the genesis creation stories

WELCOME Please sign in at the door Thanks! - . kindergarten goals. learn to read to at least a level e (see books at your

CREATION MYTHS - . think of your own version of creation. the idea is not to judge other cultures’ stories.

The Biblical Story - . - from creation to new creation - creation: “in the beginning a story”. how stories start