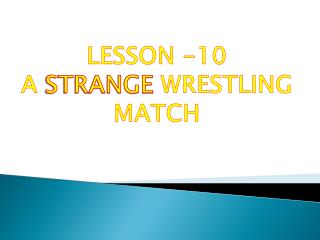 LESSON -10 A STRANGE WRESTLING MATCH . Once there lived a tall strong wrestler named Vijay Singh. He often landed in trouble because of his love for boasting. “I am not afraid of ghosts”’ he said one day.” If I meet a ghost I will teach him a lesson.” Offshore vs. Reshore Wrestling Match Wearing You Out? - Learn the total cost of ownership and take down the

A Strange Phenomenon - . there is a type of unstable particles called muon . they are produced in the upper atmosphere 14