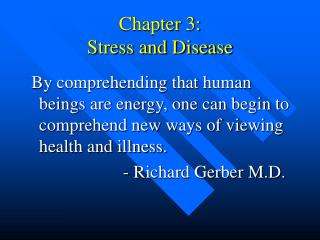 Chapter 3: Stress and Disease. By comprehending that human beings are energy, one can begin to comprehend new ways of viewing health and illness. - Richard Gerber M.D. Relationship between stress and disease?. Stress and Illness/Disease - . chapter 3. chapter overview. psychosomatic disease involves the mind and the body; it is a

Chapter 3 Rock Mechanics Stress - . basic physics. force that which changes the state of rest or the state of motion of a

Unit 3: stress and wellness - . what is stress?. process by which we perceive and respond to certain events called

STRESS 3: Stressors - . the specification. stress as a bodily response the body’s response to stress stress-related