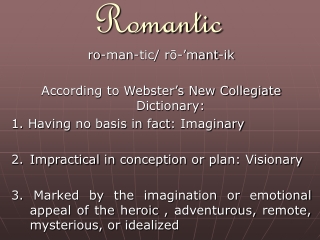 Romantic. ro-man-tic/ r ō-’mant-ik According to Webster’s New Collegiate Dictionary: 1. Having no basis in fact: Imaginary 2. Impractical in conception or plan: Visionary 3. Marked by the imagination or emotional appeal of the heroic , adventurous, remote, mysterious, or idealized. Romantic. How Romantic - . the discovery of the british romantic hero. what’s going on???. characteristics of the romantic period

Romantic Poetry - . the english and the american. romantic poetry. mostly 1800s language of every day man (even though it

Romantic Poetry - . ap english lit. how romanticism arose. romanticism was an artistic and philosophical revolt against