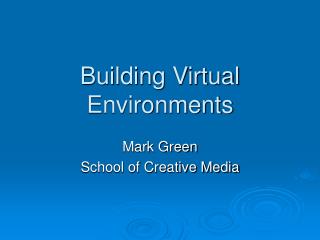 Building Virtual Environments. Mark Green School of Creative Media. Introduction. Now we know a bit about the technology, what do we need to do to start building virtual environments start looking at the tools and techniques virtual - . virtual reality 1. very nearly a particular thing car ownership is a virtual necessity when you live in the

A Brief Introduction to Virtual Water - . what is virtual water?. concept was developed by professor john anthony allan .