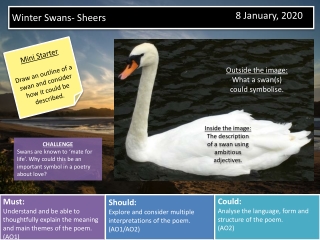 Winter Swans- Sheers. Mini Starter Draw an outline of a swan and consider how it could be described. Outside the image: What a swan(s) could symbolise. Inside the image: The description of a swan using ambitious adjectives. CHALLENGE CHALLENGE - . cpr/aed for the lay responder.

CHALLENGE - . we would like to challenge your will power…! may we have your attention please. do you feel paralyzed by

Challenge: - . insert picture. challenge:. explain the problem here. why is this important?. explain why you think this

CHALLENGE - Idea. challenge. summury. execution. results. to develop a younger audience and supporter base, who want to

Challenge - Success story: assa abloy. challenge portsystem searched for an hmi solution that would help the company to

CHALLENGE! - . week 1. tuesday:. label the following bodies of water on the map provided (see page 30 in text for

Challenge - . any volunteers?. can the rest of the people direct him/her to his/her wallet without touching him/her?

Challenge : - Increase frequency of sheba usage in a highly competitive environment where all users are multibrand

Challenge? - Rules judge – what do i do?. responsibilities stand in front of the room facing the audience ensure that

Challenge: - Use your vocab sheets to help you. challenge:. write a description of your bedroom. start with: en mi