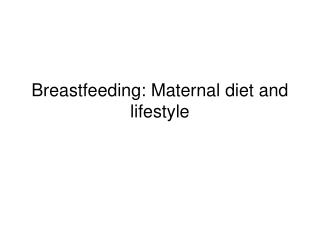 The Paleo Lifestyle - 1. the paleo lifestyle. using foods to treat disease and to maximise optimal wellness by stephen

DIET - . what is diet?. diet can be defined as the normal food we eat. but there are also special diets !. for example.

Maternal Changes with Pregnancy - . pregnancy is a period of adaptation for:. the needs of the fetus meeting the stress

Healthy Lifestyle - What exactly is healthy lifestyle ? and what should one do to achieve it. living healthy and

OBSTETRIC EMERGENCIES - Overview:. obstetric emergencies - cause damage and death to mothers and babies. they require

Maternal and Child Health - . learning objectives. by the end of this session, participants will be able to: explain the

Breastfeeding - . effective practices, benefits to mothers and infants and the role of the family physician. folake

The effect of maternal drug use on the neonate - . n. ambalavanan md, faap neonatologist. purpose of this presentation.