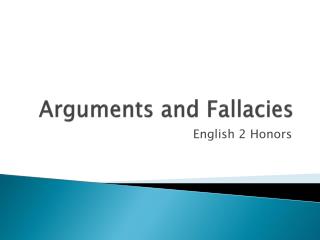 Arguments and Fallacies. English 2 Honors. Definition of Argument. Consists of one or more premises Premise : a statement( either true or false) that is offered in support of the claim being made 2 types of arguments: 1) deductive and 2) inductive Fallacies of Arguments - American literature research paper. fallacies of arguments. an effort to understand how people

7. FALLACIES AND PARA-ARGUMENTS - . in discussing a thesis we might depart from rationality because we unwittingly make a

Fallacies: Illogical Statements in Arguments - . disclaimer: the examples provided in no way represent the views or

Propaganda and Fallacies - . mrs. orso reading intervention. propaganda. an author may not always use logic and argument