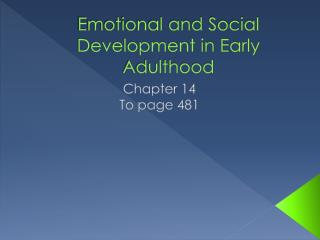 Emotional and Social Development in Early Adulthood. Chapter 14 To page 481. A Gradual Transition: Emerging Adulthood. Research shows that in many industrialized nations, most young adults only feel that they are truly adult after reaching their late 20s and early 30s Cognitive Development in Early Adulthood - . chapter 13 from page 451. additions to the study guide chapter 12 you should

SOCIAL &amp; EMOTIONAL DEVELOPMENT IN THE EARLY YEARS - . the b.c. healthy child development alliance. what is