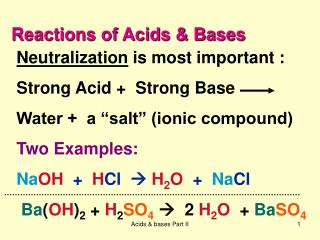 Chapter 15 Acids and Bases Reactions - . objectives. 15.1 distinguish the overall, ionic, and net ionic equations for an

Chapter 16 Reactions Between Acids and Bases - . titration of strong acids and bases. titration : a method used to

Acids &amp; bases - . acids and bases reactions occur in everyday life and are essential for understanding our world.

ACIDS AND BASES - . ph. the ph scale. is used to measure how acidic or basic a liquid is. the scale ranges from close to

Acids &amp; Bases - . arrhenius definition: an acid is any substance that increases the h + ( aq ) concentration in