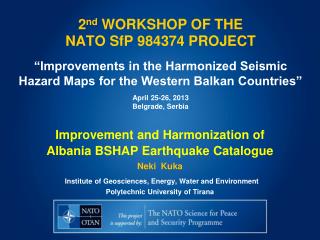 ACADEMY OF SCIENCES OF ALBANIA Alfred FRASHËRI, Gudar BEQIRAJ, Neki FRASHËRI - A review of the application of

BANK OF ALBANIA - . competitiveness of the albanian economy with a view to eventual eu accession: current situation and

BANK OF ALBANIA - . liquidity risk standards and measurements during and after the crises. indrit banka ohrid june 15 –

HARMONIZATION AND INTEGRATION OF METADATA - . an urgent task for future efficient use of the web prepared by dusan

Albania - . the most commercial berry is strawberries in albania. imports of strawberries are 40 – 60 tons year.