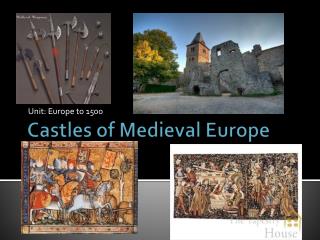 Unit: Europe to 1500. Castles of Medieval Europe . Castles! Castles! Castles! . What comes to mind when I say castles?. Castles: A Quick Overview . They were not new in the Middle Ages- but built by lords consolidating power and having fortresses to protect their land’s people Medieval Castles - . purpose. primary purpose was to provide protection of its residence during wars home to kings or

Medieval Castles - . due to a lack of a strong central government, warfare was frequent. as a result, most nobles build

Castles in Europe - . brittney haynie. the neuschwanstein castle. the disneyland park was built off of the real

Medieval Castles: Parts of the Castle - . elizabeth hamil. moat. most medieval castles were surrounded by moats. these

Medieval Europe - . world history chapter 13. beginning of the middle (ages). most people were peasants after the roman

MEDIEVAL EUROPE - . changes in europe after the fall of rome. disruption of trade – trade routes are no longer

MEDIEVAL EUROPE - . world history . learning targets. to describe the characteristics of the medieval period in world