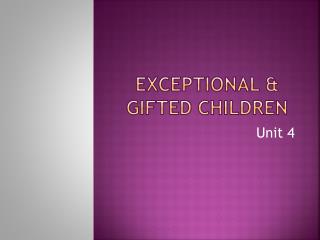 Exceptional & Gifted Children. Unit 4. Gifted Children : Their minds are often ahead of their physical growth , and specific cognitive and emotional functions are often developed differently (or to differing extents) at different stages of development. Fostering Student Independence: How to Develop a Needs Assessment and Fade Plan - . council for exceptional children

POCSO Protection of Children against Sexual Offences - . formulated in june 2012. india is home to the largest percentage

Innocent Murmurs in Children - . georgeann wang, ms3. murmurs in children. heart murmurs are one of the most common