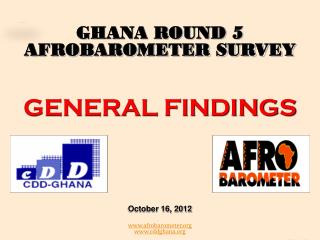 GHANA ROUND 5 AFROBAROMETER SURVEY GENERAL FINDINGS October 16, 2012. What is the Afrobarometer?. The Afrobarometer (AB) is a comparative series of public opinion surveys that measure public attitudes toward democracy, governance, the economy, leadership, identity, and other related issues

THE REPUBLIC OF GHANA - . by: rashida abdul-ganiyu. format. brief history some facts about ghana geography regions and

Team Round - . team round. this round will last for approximately 60 minutes – there is no break! there are 18