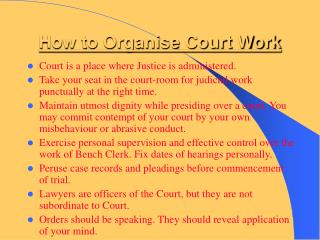 How to Organise Court Work. Court is a place where Justice is administered. Take your seat in the court-room for judicial work punctually at the right time. Maintain utmost dignity while presiding over a court. You may commit contempt of your court by your own misbehaviour or abrasive conduct. “How to organise a project” - . idea. you need an idea that sparks your interest in order to have the passion to

How to Organise Your Elective - . ???????. “somewhere that will help your resume” “somewhere you would like a

How to organise groups for assessment? - . dr fang lou school of life and medical science learning and teaching

How to Organise a Pizza Party - Of course, you could prepare the pizza at your home. but, one of the easiest ways is

Organise to Win! - . carl roper: director of the tuc organising academy. the good news!. since 1997 union membership has

How businesses organise themselves - . functional areas of a business. starter. card sort arrange the cards into some

How to Organise Party and Business Events - Organising an event is never an easy task, whether it’s a party or a

How to organise an international coastal cleanup - . registration. you will be invited to return to your site advantages:

How to Organise Your Kitchen Space Effectively - Kitchens are a workplace, and no one wants to feel cluttered while

How to organise a fun pizza party! - We are sure the sound of organizing a pizza party has got you as excited as your

How do you organise people ? - . look and see ……. your family tree. a business . a university. a different business.

Organise and complete daily work activities - . be effective at work. work goals and plans. be clear on your work duties

How Does the Family Court Law Work? - If you are in need of legal assistance from a family court lawyer in calgary,