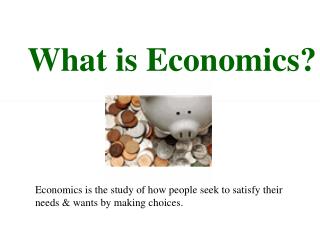 What is Economics?. Economics is the study of how people seek to satisfy their needs & wants by making choices. What is Scarcity? What is a need? What is a want?. Scarcity is the limited quantities of resources to meet unlimited wants. Unit 7 Economics Macroeconomics - . december 2, 2013. what is economics?. the study of scarcity, or how society tries to

Get a Grip on Your Money during 2012 and beyond - . 1. powerpoint presentation. keri d. hayes extension publications

CHAPTER 1: What is Economics? - Chapter checklist define economics, distinguish between microeconomics and

Economics - . what is economics?. it studies how we allocate the limited resources to satisfy unlimited wants.