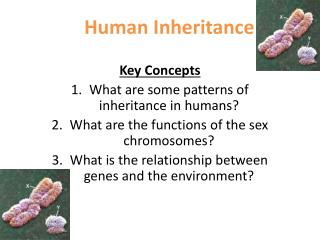 Inheritance and Polymorphism - . this section is not required material!!!!. a note about inheritance… it’s not

Chapter 14: Human Inheritance - . section 14-2: human genetic disorders. from molecule to phenotype. there is a direct

Chromosomes and human inheritance - . genes are distributed in chromosomes. each gene has a specific position (locus) on

Inheritance and Selection - . human reproduction . lesson aims. to ensure all students know the structure and function of

Table of Contents - . chapter preview 1.1 thinking like a scientist 1.2 the study of life 1.3 scientific inquiry 1.4

Human and applied genetics - . section 1 vocabulary:. 1. carrier: an individual that is heterozygous for a recessive

Human Inheritance - . recall:. how many chromosomes do human body cells contain?. 46. yes!. are there different types of

Human and applied genetics - . section 1 vocabulary:. 1. carrier: an individual that is heterozygous for a recessive

11.1 BASIC PATTERNS OF HUMAN INHERITANCE - . what you will learn -how to determine if an inherited trait is dom/rec