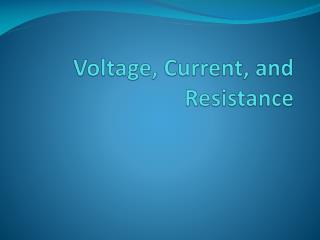 Resistance, Current and Voltage - . making sense of circuits. resistance (r). how much an object resists electricity

Electric Current Voltage Resistance - . physics. flow of charge. charge flows when there is a potential difference when

Current and Voltage - . current. flow rate of electricity current flows from + to – measured in amps – 1 amp = 1

Voltage and Current - . whenever positive and negative charges are separated, voltage is the energy per unit charge

Current and Resistance - . resistance. behaviors of resistors. resistance – the opposition to the flow of current in