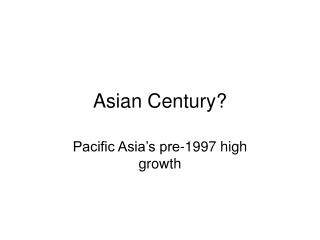 Nineteenth century: historical linguistics - . before the 19 th century, language in the western world was of interest

Not If, But When With two influenza pandemics in the 19 th Century and three in the 20 th Century, we’re due for ne

Chapter 26: Toward A New Century - . section 1: reinventing government. 1. . towards the end of the century many

East Asian Economy: KBE and Innovation in East Asia * Some parts of this note are borrowed from the references for t