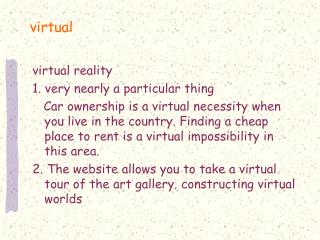 virtual. virtual reality 1. very nearly a particular thing Car ownership is a virtual necessity when you live in the country. Finding a cheap place to rent is a virtual impossibility in this area. Week 3 Virtual LANs, Wireless LANs, PPP, ATM - . virtual lans. it is the territory over which a broadcast or multicast