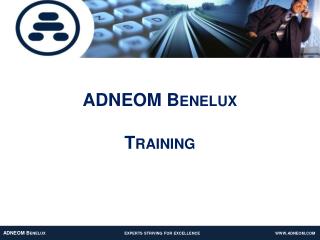 ADNEOM Benelux Training. ALM. Different businesses - Commercial Bank : making loans to customers and hoping to earn a return because the cost of the funds borrowed is less than the interest earned on the funds lent out. ADNEOM Benelux Training - . futures. definition : a futures contract is an agreement between two counterparties to

IFFR Benelux - . luxembourg meeting may 2007. is like flying rotary friendship over the world. giving rotary it ‘s

Update on PTC Benelux - . dirk valgaeren benelux area manager. i want to start by thanking …. you as a customer