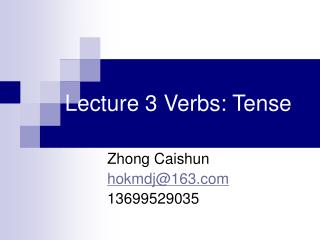 Lecture 3 Verbs: Tense. Zhong Caishun hokmdj@163.com 13699529035. 1. What is the grammatical feature of verbs? 2. How can we categorize them? 3. How are the different tenses linguistically realized and pragmatically used?. Richard eats/eat/ a lot of pasta.

Past Tense - . unit 3 lesson 6. objectives. students will:. write the past tense form of verbs correctly. proofread for

Verbs in the Present Tense -RE - . what verbs on –re other than –dre verbs do you know?. write as many verbs on –re

Conjugate –y verbs in the preterite tense - . grammar essentials # 61. -y verbs. when i is surrounded by e and o in any

Present Tense of Regular –AR Verbs - . an infinitive tells the meaning of a verb without naming any subject or tense.

Irregular Verbs in Present tense - . by: lexie elliott and jonathan bogac. conjugating. conjugation of verbs are

The Present Tense! - . regular and irregular verbs. conjugations:. in french, there are 3 types of verbs in the present

Changing Verbs From Present to Past and Future - . second grade grammar. three tenses of verbs. past tense verbs. most