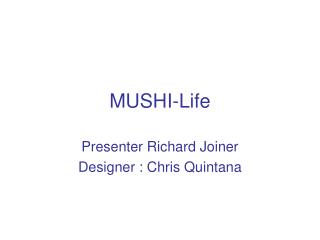 LIFE-LONG LIFE-WIDE LIFE-DEEP LEARNING - . bronwyn bevan march 30, 2014. what is the exploratorium?. exploratorium a

Life Insurances Minnesota Life - . questions to consider. how many people depend on you for support? do you have a

LIFE - . click to advance slides. o son of spirit! my first counsel is this: possess a pure, kindly and radiant heart,

Life - Mars. life. on. your task is to design a space station based on mars. you will need to have space for between 2500

LIFE - . click to advance slides. in life, there are moments when you miss someone so much that you would only fulfill

Life - . life. life. step 1. your user id is your city network login which must be typed in all capital letters.