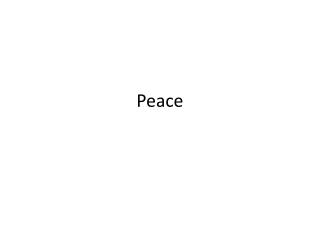 Peace. Quiz. Who was the leader of the moral force Chartists? What good idea did Fergus O’Connor set up? Why is the centre of Wimbledon not in Wimbledon village? What’s the average growth of London 1801-51? Name two arguments against universal franchise. Quiz. What is swetted labour? Peace, Perfect Peace - . ephesians 2:14-18. peace, perfect peace. we do not live in a peaceful world there is constant

PEACE - . 9th tabor . definitions. if we have no peace, it is because we have forgotten that we belong to each other.

Peace - . a blessing for all. the mass of men lead lives of quiet desperation. henry david thoreau. god’s peace, which

Peace - . why is it important anyway?. why do we need peace in preschool?. children are exposed to violence everywhere

PEACE - . c.s. lewis said ‘expectations are everything’ we get depressed over our depression. we are sad that we are

Peace - . what is peace?. peace is a state of harmony where there is no violent conflict. there is also equality and

Peace - Lectio divina. it is especially necessary that listening to the word of god should become a life-giving

Peace - . jesus is our peace. biblical peace: not the absence of conflict (or ignoring it), but the presence of wholeness

Peace - . inner. my interest of