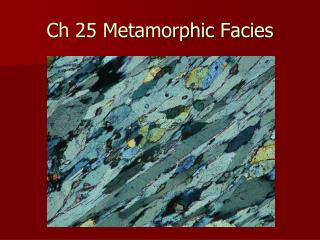 Metamorphic Facies and Mineral Assemblages - . contact and regional metamorphism. metamorphic grade. one of the primary

Ch 25 - . microbial diseases of the digestive system. slos. list examples of normal microbiota for each part of the

Ch. 25 - . vibrations and waves. a vibration is a to and fro movement over a certain time period. (a pendulum) a wave is

Facies: Turbidites - . i . introduction ii. the bouma sequence iii. types. introduction. ● what is a turbidity current?

Reservoir Facies - Optimum application of geosciences in the search for hydrocarbon in frontier basins, examples from

Ch. 25 Notes - . hormones and plant growth. unlike most animals, plants do not have a rigidly set organization to their

Ch 23-25 - . circulation and respiration digestive and urinary communication and control. i.      the cardiovascular

Ch. 25: Waves - . a wave is a rhythmic disturbance that carries energy through matter or space. general wave

Ch 25 Metabolism - . 1. explain why atp is a useful form of energy in cells. 2. hydrolysis of phosphoanyhdride bonds has