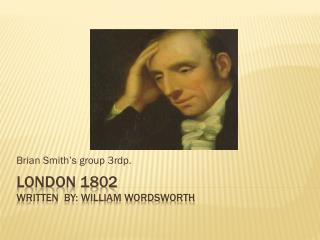 Brian Smith’s group 3rdp. London 1802 Written by: William Wordsworth. From the first run through of reading this poem one will be left thinking wtf ……just…happened…. Welcome to London! - . london is a capital city of great britain. over 8 milion people live there. . london was founded

William Shakespeare - . “he was not of an age, but for all time” ben johnson on william shakespeare. background on

What you can see in London - . in london you can see a lot of interesting things, like: - london’s eye -london’s

Jack London - . 1876-1916. jack london. the most successful writer in america in the early 20th century. his vigorous

LONDON - . london is the capital city of england, not only is it well known for that but london has many famous buildings

SOS Security Services – The most Popular Security Agency in London - Http://secureonsitesecurity.co.uk/ sos-is one of