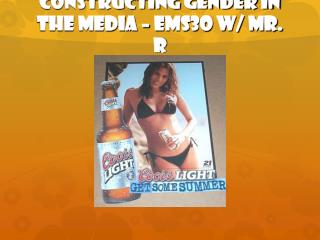 Gender and Educational and Occupational Choices - . jacquelynne s. eccles university of michigan paper presented at the

Gender and Social Stratification - . gender and anthropology. interest in hierarchical relations between men and women

The Media - . learning objectives:. by the end of the unit you should have a knowledge and understanding of: - what

GENDER AND IDENTITY - . how does gender shape your identity?. learning objectives. explain how gender influences a