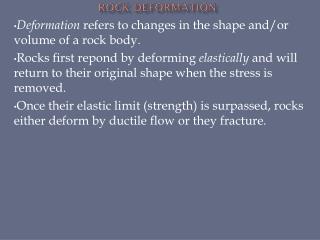 Rock Deformation. Deformation refers to changes in the shape and/or volume of a rock body. Rocks first repond by deforming elastically and will return to their original shape when the stress is removed. Rock Deformation I - . rock deformation. collective displacements of points in a body relative to an external reference

Deformation - . let me tell you the secret that has led me to my goal. my strength lies in my tenacity. louis pateur.

Deformation - What is deformation?. deformation is the folding, faulting and doming of the crust caused by plates