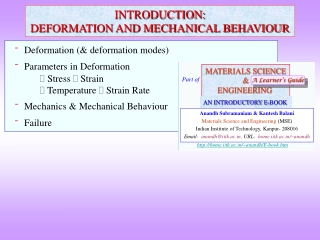 ATMO 251 - . fronts and frontogenesis , part 2. deformation. there are three important properties that a vector wind

Bulk Deformation Processes - . operations that induce shape changes on the workpiece by plastic deformation under forces

DEFORMATION OF THE EARTHS CRUST • Types of Deformation 1. folds 2. faults - . folded rocks 1. due to compressional

Chapter 5: Deformation - . let me tell you the secret that has led me to my goal. my strength lies in my tenacity . louis

Earth Science, 12e - . mountain building chapter 10. deformation. deformation is a general term that refers to all

MECHANICAL PROPERTIES - . issues to address. • stress and strain : what are they and why are they used instead of load

Geologic Structures - . structural geology – study of deformation of rocks and the forces that cause deformation.