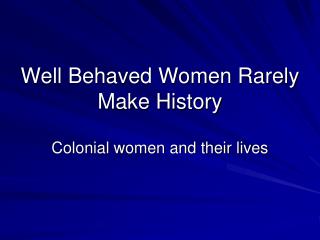 Well Behaved Women Rarely Make History. Colonial women and their lives. OK to begin lets set the scene All the women in the class need to leave Why? Because in early America only a very few women received and education But before you do … Well-behaved objects - . 3.0. main concepts to be covered. testing test automation debugging. we have to deal with

Make Your Dog a Well Behaved one During the Next Trip - For more information visit here :

Digitizing a Small Collection of Relatively Well-Behaved Monographs - . or,. where are netlibrary, questia and ebrary

Rarely Ever - As you come in please sign in, take a sticky dot, mark the dot with a symbol of any kind, and place where

Badly behaved Spanish! - . sometimes in languages, you come across phrases that just don’t seem translatable, or

Women Make Progress - . 17.2. objectives. analyze the impact of changes in women’s education on women’s roles in

Women Make Progress - . chapter 8 section 2. us history bellwork. locate three women in this section that were key to the

WOMEN IN HISTORY - . by: erica shimboff third grade presentation. the beginning. there was a time in history when women

Women In History - . 2 nd grade spring 2010. jane goodall. jane goodall will be remembered for her discoveries about