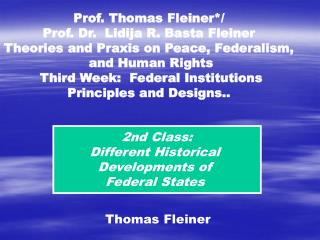 CFCLI Class of 2010 A Look Back - . november session notre dame college. great, but will it float?. december session

Standards - . ssush19 the student will identify the origins, major developments, and the domestic impact of world war ii,

How to Apply for a Federal Job - Finding and applying for jobs in the federal government ... federal jobs are highly

Classroom Assessment Scoring System CLASS - Overview of class. what is ?quality"?what does class measure?what does

G-13: The Federal Bureaucracy - . chapter 13- the federal bureaucracy. (1). define what a bureaucracy is, and summarize

Psychological Therapies in the Modern Era - . centre for psychological therapies may 19 th 2009. may you live in