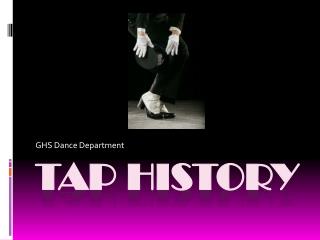 GHS Dance Department. Tap History . 1650-1900: From Clog to Soft Shoe. The fusion of British Isles clog and step dance with the rhythms of West African drumming and dancing in colonial times created an ever-evolving art form that continues to flourish today. Tap Dance A Brief History by Wendy Oliver - . savion glover, 2004. rhythm in motion. one of the few dance forms in which

Tap Project - . presentation was made : wiktoria liszka and karolina rogala kl. i „b”

“Electronic Tap” - . or how can we deal with large classes. basic protocol - prep. one protocol (and we might count