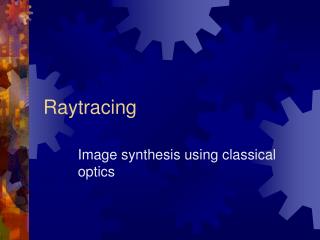 Raytracing. Image synthesis using classical optics. Raytracing. Create an image by following the paths of rays through a scene “ Backward raytracing": traces rays out of the light sources out into the world Raytracing method application to the wavefiled decomposition - And model reconstruction from vsp data.