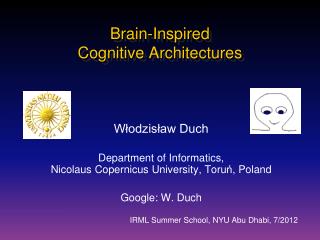 What is Google Rank Brain? - Http://kottongrammer.com/what-is-rank-brain/ detailed infographic that explains what

Computational Cognitive Neuroscience - . psyc 4175/5175 randall o’reilly. how would you build it?. if you want to

Cognitive revolution - . in many fields of science, art, business and engineering we are going through cognitive r

Insight (cognitive learning) - . understanding why you do it developed on criticisms and past experiences (good or bad).

Cognitive Theory - . coleen beisner jonathan lorenz. what does the theory mean?. activities like thinking and remembering